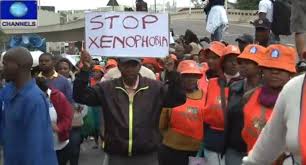 Press Statement Issued by the State of the Union Nigeria Campaign Platform (SOTU-N-CAMP) on the Xenophobic Attacks by South Africans on Foreign Nationals in their Country.

The State of the Union Nigeria Campaign Platform (SOTU-N-CAMP) is the Nigerian national platform of State of the Union (SOTU), which is an Africa continental campaign that demands and strengthens Nigerian Citizen’s participation in policy development, implementation and monitoring within the African Union (AU). SOTU-N-CAMP comprises 29 Civil Society Organizations working extensively across all governance thematic areas.

Following the barbarous, erratic and most inhumane xenophobic attacks meted out by South Africans in what the world has commonly renounced and lambasted, the State of the Union Nigeria Campaign Platform deems it fit to issue this statement.

The State of the Union Nigeria Campaign Platform is deeply saddened by the current spate of gross misconduct, astonishing cruelty and brutal attacks being perpetuated by certain unscrupulous elements of the South African populace which has led to the loss of lives and properties of non nationals carrying on legitimate businesses and living peacefully within stipulated confines and provisions of the Laws of the South African State.

SOTU-N-CAMP notes with profound regret the conduct of these sets of criminals and calls on the South African government to as a matter of scurried urgency institute all duly recognized government mechanisms and willpower to nip in the bud all manner of xenophobic attacks and every trace similar to racial intolerance that is fast becoming a trend within South African.

While the attacks which for the want of a better word within the English lexicon is best described as gruesome have continued in the last couple of days without any meaningful end in sight, the South African people have mostly looked-on with the governments’ condemnation and deployment of security personnel on the streets clearly lacking the much needed deterrent to halt the attacks.

SOTU-N-CAMP calls on the government and people of South Africa to at this extreme and critical moment adorn the strength of character and its entire semblance that such challenging situations demand in ensuring that these attacks are brought to an immediate stop.

This platform recalls with severe depression the enormous contributions Nigeria and other well meaning African countries made to South Africa during the perfidious apartheid regime that lasted several decades. We note that this was done in the spirit of solidarity and brotherhood and are deeply concerned of the insistence of South Africans to carry on such crimes that shock the very existence of humanity in the name of xenophobia.

In conclusion, we call on the South African Government in particular and the international community as a whole to be constantly reminded of the Responsibility to Protect under International Law and several global, continental and regional instruments. The South African government must go beyond mere condemnation to institute every necessary deterrent measure that any disciplined government must have as a monopoly.

While we also call on the African Union to begin all necessary inquiries into these continued attacks as a number of such attacks have been both reported and unreported in time past, we must also pass the message to these sets of common criminals trying to place the good people of South Africa in bad light of the dangers they put their countrymen/women across the globe due to reprisal attacks.