The Greater Houston area has been identified by the U.S. Department of States to have the highest number of Nigerian immigrants. About 150,000 Nigerians live in Houston as of 2014. Although most of these families are very progressive and highly educated, the problem of gender based violence plagues the community.  Research on gender based violence among African communities has been very scarce, hence little is known about the challenges faced by women particularly in these communities. Although men are also likely victims and do suffer gender based violence, research has shown that male victims of gender violence are often  those in an intimate partner relationship with an American citizen especially for green card reasons where the gender roles are played differently based on cultural differences of the partners.  The discourse here is  focused on gender based violence among  Nigerians in diaspora.

Some of the reasons advanced for gender based violence in these families include stress, economic hardships, social and cultural expectations, third party interventions and mental/ psychological or spiritual problems.  Often, migrants are faced with the challenge of balancing the traditional gender roles with the realities of lifestyles in the western world. Generally, females acquire an enhanced sense of independence; the males are faced with a diminished perception of power and control. In the family’s quest to attain the American dream and possibly take care of people at home, both partners go out to work long hours. Sometimes, the female works longer than the male; and sometimes the males are either unemployed or under employed yet the female is still required to come back after prolonged hours of work to cook, clean up and perform other duties while responsibility for bills and upkeep are shared. Many Nigerian women especially those in the Nursing field have died due to pressure, ill-health or physical violence (including being stabbed, shot, strangled, scaled with hot liquids etc.) because of the conflicts arising from these roles.

Unfortunately, gender based violence is largely unreported for many reasons and particularly, because of cultural beliefs that, “you don’t go to court or police and come back home as friends” and patriarchal hierarchy where the male is accorded a superior position in the marriage relationship. Patriarchal hierarchy is not uniquely Nigerian so that some critics have argued that it is not a license for abuse in a relationship.  Reportedly, most women‘s approach at resolving the dilemma is first to report to family members and or close friends. The next step is usually to report to religious leaders.  Unfortunately, these strategies are often unsuccessful and the woman is viewed as a prostitute, disrespectful or proud. She is stigmatized and in some churches seen as a backslider or no longer fit to minister, she is perpetually stigmatized and shamed.

Spouses in a violent relationship should not be intimidated to seek help or even get out of danger as an alternative to being maimed or killed. All stake holders must be educated and informed about the consequences of violence on the individual, the family and society. Religious and community leaders should be trained on how to handle domestic violent cases without stigmatizing anyone. Everyone especially men should be educated on the legal consequences of domestic violence and physical assaults regarded as felony under the law. An aggressor could end in prison for any period of time from 1 to 10 years or more with fines in addition to disenfranchisement, loss of earning potentials, citizenship, student loans and other benefits. Children are the most impacted in violent homes. First, these children are learning by experience that it is alright to abuse and/or be abused, inadvertently producing a next generation of abusers.  Research has shown that first generation immigrants have lower criminal records than their children. Why is this so? Second, violence in a home is unhealthy to all both physically and spiritually.

Violent behavior is a product of anger, an inability to rule one’s emotions. It is a character flaw, and often an episode of insanity. It is self-destructive. All religions and civilization condemn manifestations of anger whether implosive or explosive. Love is a choice that God made in our favor, giving us such grace that we do not deserve. If you love your spouse, you will not beat or destroy him/her. No man in his right mind destroys what he loves rather he cherishes and seek to keep that which he loves forever in perfect condition.

Dr. Alaba Oludare is an Attorney and a Professor residing in the United States. She obtained her first law degree (LL.B, B.L.) from Lagos State University and Nigerian Law School. She has tertiary institution teaching experience including teaching Administration of Justice courses at Texas Southern University, teaching and coordinating the criminal justice program at Rust College, Holly Springs, MS as well as serving as the Pre Law Adviser. Alaba also has legal practice experience including Legal Advising to the Federal Road Safety Commission, and Corporate Attorney with LLM degree in Tax Law from University of Alabama, Tuscaloosa; She is presently teaching criminal justice courses at Mississippi Valley State University and actively involved in health disparity research training as one of 25 scholars from different universities across the United States. 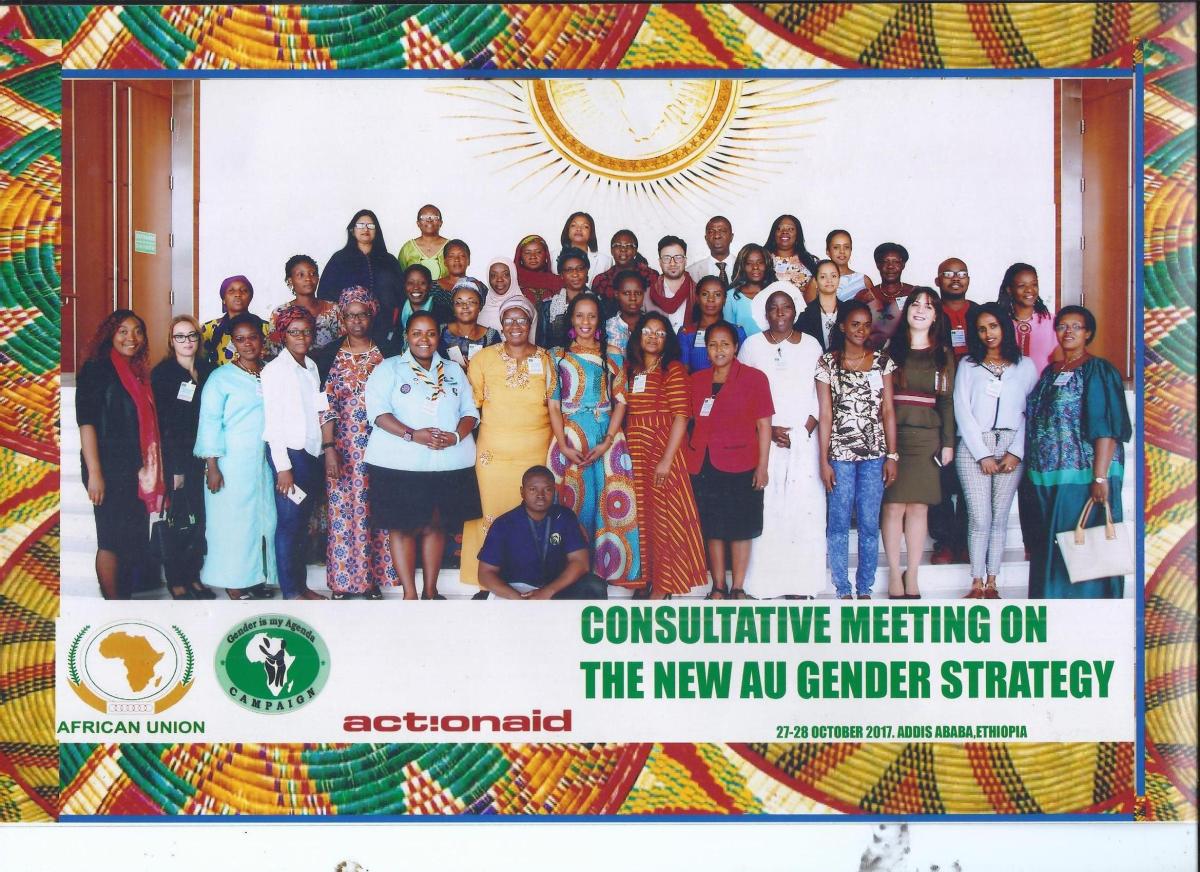 We, representatives of Civil Society Organization (CSOs) promoting gender equality and accountability for women’s rights in Africa, participants to the “African Union Commission (AUC) Consultative Meeting on the New Gender Strategy 2017-2021, from 27-28 October 2017, Addis Ababa, Ethiopia organized by Gender is My Agenda Campaign (GIMAC) Network in partnership with Women Gender and Development Directorate (WGDD) of the African Union Commission and Action Aid International;

WELCOME the development of the AU gender strategy for the period 2017 -2021which is in line with AU Assembly/AU/Decl.5 (XXV), Twenty-Fifth Ordinary Session, 2015, Johannesburg, South Africa, on aligning policies with Agenda 2063 and the African Union Commission’ approval to design a new strategy for gender equality and women’s empowerment in 2016;

ACKNOWLEDGE the invitation of diverse Civil Society Organizations. Media, Research Institutions and other Women’s Rights Organizations who are key in realizing the implementation of this strategy at all levels to contribute, participate and shape the new AU gender strategy including assessing the capacity requirements for its implementation, monitoring tools, harmonization with other frameworks and plans for its operationalization;

RECOGNISING that this process is timely in view of leveraging the gains made by the AUC on advancing gender equality and women’s empowerment on the continent through policy frameworks that include the Solemn Declaration on Gender Equality in Africa (SDGEA), Maputo Protocol and other ground breaking and gender responsive initiatives, the SDI tool for monitoring;

SUPPORT the ongoing AUC reform and call for strong integration and institutionalization of gender throughout all structures, policies and processes. In light of this, WE REQUEST for the mobilization of resources and a fund that will address women’s empowerment and accelerate the realization of gender commitments;

COMMIT ourselves to support AU Women, Gender and Development Directorate towards the realization of the AU gender strategy as partners in the development through to implementation.

We call the AU Gender Directorate mandated with the development of this strategy to focus on the following key priorities:

We urge the AU Gender Strategy to incorporate the following substantive cross-cutting approaches and values as drivers of change towards achieving gender equality in Africa:

APPRECIATE   the continued recognition by AUC that gender and youth are central to development and WE ASK for support for strengthening of the AU Gender Directorate’s in implementing its mandate and coordination mechanisms and continued support to civil society.

Dated at Addis Ababa this 28th Day of October 2017

Centre for 21st Century Issues (C21st) is on ground with other stakeholders who truely  belive in genuine solutions to address the menace of climate change at COP23.

C21st as a member of Women and Gender Constituency will work closely with the feminist bloc, Demand Climate Justice, Pan African Climate Justice Alliance (PACJA) and ACCESS to influence  lobby  and advocate for a gender just outcomes from the COP23 negotiations.

C21st is committed to pursuing all the key demands of the Women and Gender constituency which includes,  adopt a robust  gender action plan, deliver on finance, Ensure climate solutions are gender just, promote energy democracy and protect ecological food systems among others.

There are other issues and vents  which are very important to move climate change work at the national level  in Nigeria which will be followed closely.  Some of them are; UNFCCC Gender Action Plan, Climate Law and Governance, climate Change and Agriculture, Sustainable Energy for All,  and climate Finance.

C21st will be active on twitter with important tweet messages. Watch out for our #hashtags  #MindTheGap, #WomenClimateJustice, #OurSolutions and  #WomenDefendCommons 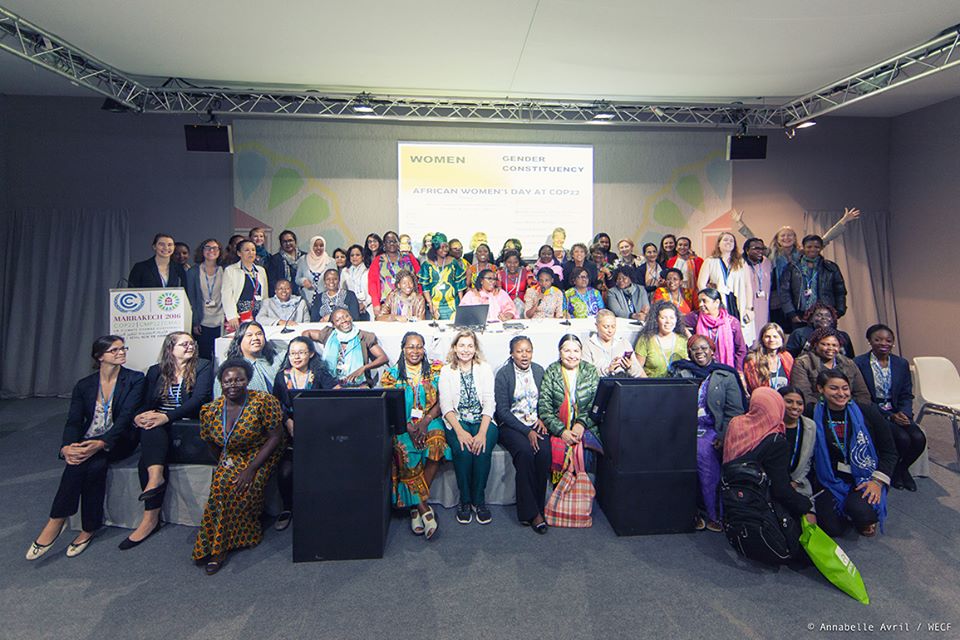 African women reject the European Union’s unnecessary meddling in Africa’s Renewable Energy Initiative (AREI).  African women are very concerned at the manner in which some European countries, France in particular, influenced some African leaders to hastily approve projects without having a transparent process with social, environmental and gender criteria in place.

At a board meeting in March in Conakry, the European Commission and France in collusion with a few African countries repackaged existing European Union projects for Africa, but which did not originate from Africa, as first batch of projects to be approved by AREI.

The way and manner these projects were introduced and approved- by bypassing AREI’s process being developed for social and Environmental criteria- is a very negative sign, setting the entire process off on a negative footing, refusing African people’s transparent decision making, and entirely against the principles by which AREI was created.

African women insist that European Union cannot dictate for Africans over any issue especially the one concerning universal access to clean, appropriate and affordable energy for all.

Women are particularly concerned about the unnecessary interference by European Union and France particularly as it can jeopardize the noble objective of AREI in providing people-centered and gender responsive clean energy solutions capable of addressing the chronic energy poverty which affects women in Africa disproportionately.

African women join their voices with other Civil Society Organizations in Africa to condemn the undue interference of European Union in AREI. African women stand for a strong and independent AREI, with full and meaningful participation of women’s organizations in all levels of the decision-making processes.

For and on behalf of African women