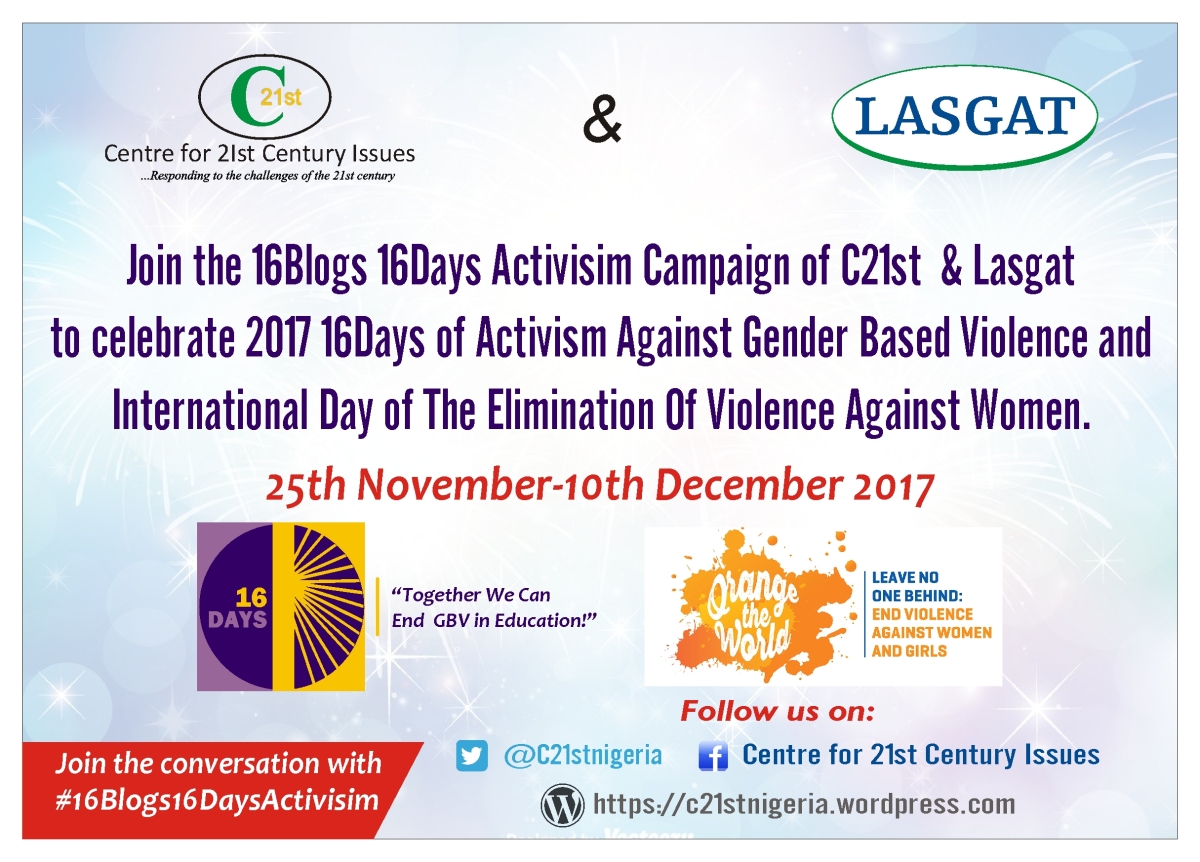 The Centre for 21st Century Issues (C21st) in partnership with Lagos State Gender Advocacy Team (LASGAT)   will be celebrating 2017 16 days of activism against gender based violence  from 25th of November to 10th of December 2017.

Campaign tagged 16 Blogs For 16 Days of Activism Against Gender Based Violence will run for the 16 days. The campaign will feature 16 blogs written by activists, scholars and social development practitioners from Africa and diaspora.

The blogs will explore different aspects of gender based violence  in all spheres of societal life as it affects girls, women, boys and men.  This will be in tandem with the 2017 themes,  “Together We Can End GBV in Education” and “Leave No One Behind”

A discussion tread with hastag #16Blogs16DaysActivism  will  be initiated on social media platforms to crowd source solutions and useful information on ending all forms of violence.

On ground, in Nigeria, training sessions on Gender Based Violence will hold in Low fees Private Schools across Lagos state to build awareness among pupils, teachers , parents and all relevant stakeholders in the education sector.

The objective of this campaign is to raise critical  awareness about the negative impacts of  gender based violence and raise voice to end all forms of violence in our society.

Though women and girls have been acknowledged as the major victims of  gender based violence but  recently it appeared that the  paradigm is shifting towards men as victims.  The  report of  two Nigerian men allegedly stabbed by their wives about two weeks ago  and the subtle justification coming from some women as reported by the social media is is lending credence to this shift. This no doubt  is disturbing and calls for increased awareness an deeper inquiry into the reasons behind the shift and indeed all forms of   violence. Violence in any form and from any person should not be condoned or justified.

As we start the discussion today  25th of November 2017, a day set aside by united Nations to eliminate all forms of Violence against Women and girls let us reject all forms of violence and ensure peace in our homes and communities.