SBSTA Closing – Delivered by Daisy Emoekabu  of Centre for 21st century Issue (c21st) on Nov 14, 2016
Thank you for this opportunity to speak on behalf of the Women and Gender Constituency.
For women, agriculture, forests, and land use in general, are themes that are of crucial importance. We are the majority of the world’s food producers and play a key role in the transformative change that is needed to change current highly polluting industrial models in the agriculture, livestock and forestry sectors into genuinely sustainable and resilient land use initiatives. Such initiatives are often driven by communities on the ground, and it is important climate policies provide appropriate and adequate legal, technical and financial support for such community initiatives.
In this light, we want to express our deep concern about proposals to include agriculture, forest conservation, and land use in general, as offset opportunities in market-based mechanisms and approaches. Due to contextual inequities these market-based approaches will always lead to the marginalization of women, Indigenous Peoples, smallholders and other politically and economically marginalized actors. Moreover, land use related offsets are very unreliable and there are no accurate accounting methodologies for land use change. That is why we vehemently reject the inclusion of land use in carbon markets. We also support the concerns of certain Parties about market-based mechanisms in general.
We are particularly upset about the proposals for an international offsetting mechanism for the emissions produced by the aviation industry, probably the most rapidly growing source of greenhouse gas emissions on the planet. These proposals were deliberately developed outside the framework of the UNFCCC and its Paris Agreement, by a body that was originally established as a technical body, but which has shown clear signs of conflict of interest with the commercial interests of the aviation sector the past years. We cannot allow this body to determine the decision-making processes under the UNFCCC related to such an importance source of emissions, and the best way to deal with it.
We urge the SBSTA, and the other bodies under the Convention, to maintain its integrity and make sound recommendations and decisions based on sound science. Decisions that include a promotion of the so-called bioeconomy, or international commodity trade in agricultural products, are clearly based on commercial interests of certain business actors rather than the rights, needs and interests of common women and men, including the millions of women that produce your food. So we urge Parties to reclaim the UNFCCC and its Paris Agreement as a public instrument that should be steered by public interests based on sound science that is free from conflicts of interests of other industry influence.
Thank You

On Saturday, 11th of November, the Centre for 21st Century Issues (C21st) and women Environment Program facilitated a skill share session on the theme: “Breaking Patriarchal Barriers for Gender Sensitive Climate Change Initiative.” The side event, which was hosted by the Global Climate Change Alliance (GGCA) Innovations Forum was attended by women and men across the globe, who participated and shared their experiences on patriarchal challenges they have in course of implementing climate change projects in the local and national context.

Climate change affects everyone, yet women among other vulnerable groups in developing and least developed countries bear the brunt of the impacts of climate change. While it is now important to start looking at ways to reduce the negative effects of climate change on women, attention is drawn to the challenges thrown up by patriarchy at different levels of climate governance. Either at the community or the global climate policy level, patriarchy continue to constitute a stumbling block to a gender just climate policy and interventions.

In many societies, it is a big challenge to have access to women without negotiating with community leaders who are mostly males. It is acknowledged that decision making positions and authority lies with men.Patriarchy is a system issue which manifest in almost every facet of societal life. Majority of women and men are recruited and socialized into It.

The kind of barriers posed by patriarchy for women includes inadequate access to information, limited opportunity for aspiring to decision making positions, lack of voice, representation and participation, to mention a few. Of course, these barriers in most cases leave women vulnerable to the impacts of climate change.

At the global policy levels, the barriers manifest in a different form though it is still linked to patriarchal challenges identified at the local levels and the different processes. The issues of developed and the developing countries take the centre stage, women and gender issues are perceived as less important to other pressing issues of climate finance, emissions reductions and technology transfer.

However, these perceived pressing issues are issues that are not gender neutral, it affects men and women. For instance, women need climate finance to trickle down to the local levels where climate change is biting harder. Lack of finance and feminized poverty inhibits women’s adaptation to the impacts of climate change. Equally, risky and unsafe technologies must be avoided in mitigating climate change. Thus, women and gender have a place in all the issues being negotiated under the UNFCCC.

Way  Forward
As noted by the skill share facilitator, Ms Titi Akosa and other participants – ‘the patriarchal issue is a system issue and thus needs a system change to correct.

While finding ways to break barriers, women must not see it as a battle-line between men and women but as a negotiation process for change. Women should be firm but subtle about breaking barriers and push the issues of women empowerment forward.
There is need for aggressive awareness about patriarchy, its effects on women and the society at large; and its interconnections with climate change at all levels. Women should endeavour to work in unity and collaborate with men in delivering gender responsive climate projects.

The experiences garnered by the facilitator as one of the women climate justice advocates supported by Women Environment and Development Organization (WEDO), advocating on behalf of women and gender in the processes leading to securing the Paris Agreement was very insightful. The facilitator and other women climate justice advocates engaged negotiators with women’s key demands, provided gender responsive texts and shared perspectives on the importance of gender just climate policy. These are best practices in women supporting each other to raise awareness in advancing women and gender issues in the negotiations.

It must however be noted that gender and women responsive climate initiatives may not always break barriers posed by patriarchy. This is very possible if projects are not well articulated to have impacts on gender relations and or aimed specifically to target barriers imposed by patriarchy against women.

Participants agreed that there is need for a deeper appreciation of the challenges imposed by patriarchy and that the challenges should be dealt with in an integrated manner to engender a supportive environment for gender equality to thrive.

Ahead of the 2016 Marrakesh climate change Summit, the Centre for 21st century Issues (C21st), one of the Civil society Organization (CSOs) working with Women Environment Program in Africa under the Women CSO networking to realize the sustainable Development Goals project also known as Women 2030 Project participated in the African regional Train Of Trainers (TOT) which held from 4-5 of November 2016 in Marrakesh Morocco.

The Women 2030 project is an European union funded Project being implemented in 52 countries across different regions of the world  by a coalition of 5 global regional women and gender networks working towards the realization of the sustainable Development Goals (SDGs), including SDG-13 on Climate Action.  The organizations are; Women in Europe for a Common Future (WECF); Women Environmental Programme (WEP); Global Forest Coalition (GFC); Gender and Water Alliance (GWA); and Asia Pacific Forum on Women, Law and Development (APWLD).

The TOT which was aimed at building the capacity of  women organizations in Africa to advise  local, national and regional gender responsive sustainable development policies  (2030 agenda and Paris Agreement ) brought together 30 women’s organization from Across Africa.

The two day training introduced participants to the Women 2030 Project and explained the responsibilities of participating organizations to  monitor the implementation of the SDGs in their countries and how to  achieve change on the ground with women and men  through gender assessments, writing of shadow reports, policy dialogues and sharing lessons learnt.

After the training the women participated in the Marrakesh climate summit working with the Women and gender Constituency of the United Nations Framework Convention on Climate Change (UNFCCC) to voice the needs and concerns of women in the global climate discussions particularly addressing structural barriers to climate protection and the urgent need for a gender just climate action.

On Thursday, November 10 2016 the Women and Gender Constituency of the UNFCCC hosted an interactive ACTION at COP22 to highlight institutionalized barriers to women’s participation in climate decision-making at household, community, institutional, national, regional and international levels.

Despite women’s disproportionate vulnerability to climate change, women are marginalized from climate decision-making bodies and generally do not hold positions of leadership or authority. Women and other civil society groups demand that governments and institutions ensure women’s full and equal participation in all levels of decision-making, and reach the goal of gender balance through targeted resources and capacity building efforts.

Women and other civil society organizations from around the world  are  also demanding that structures of power are transformed with participatory, rights-based decision-making processes for climate policy that are inclusive of all peoples, particularly women and men in frontline and Indigenous communities in 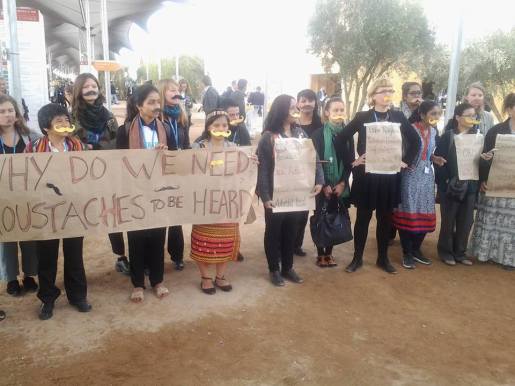 the economic South and North. Women demand to be equally and fully engaged in all levels of climate change decision-making! We should not need moustaches to be heard!

On the 6th of November, a day before the official opening of COP22, Women from across the globe gathered at Radisson Blue hotel to strategize and plan advocacy activities to push their key demands within and outside the UNFCCC.

Knowing that COP22 is a key policy space where actions to implement the historic Paris agreement are going to be catalyzed, women under the leadership of the Women and Gender Constituency of the UNFCCC  had prepared  their  key  demands titled “Women Demand Real Action To Promote Human Rigths, Justice and Sustainable Future For All”

Some of the key demand which women will be advocating during the COP is;

COP22 is an important policy moment for women to ensure gender equality and women’s empowerment is mainstreamed in action plans to implement the Paris agreement. Thus In the next two weeks women are going to be tracking and lobbying negotiators to support these demands. Various advocacy actions will be undertaken to ensure that these demands are reflected in the overall outcomes of COP22.

Because COP22 is taking place in Africa, African women are fully on ground here in Marrakesh working with their counterparts from other parts of the world to ensure issues peculiar to their context as African women are taken into account.

Significantly 35 women from 15 African countries have been mobilized under the Women 2030 project, a project designed to measure the achievement of the SDGs on gender equality around the world to participate in COP22.

The Women2030 project is being implemented by a consortium of women organizations which include; Women Environment Project (WEP) Global Forest Coalition (GFC), Women Engaged for Common Future (WECF) , Gender and Water Alliance (GWA) and   Asia -Pacific  Forum On Women Law and Development  (APWLD)

Over the two weeks of the COP these women are going to be raising voice for women in the negotiations and organizing to ensure that issues and concerns of women are adequately addressed in climate change policies and actions.